My dog Murphy has nine lives. I swear.

I rescued him from animal control in Kansas City, Kansas, way back in 2005. Actually, to be completely factual, I found him online and my ex-husband Bryan went and got him for us. I remember Bryan saying that once he got Murphy in the car he knew we were in trouble. Murphy jumped from the front seat to the back seat to the top of the seats and then did it all again. He was a bundle of energy. A flea infested, mange-ridden bundle of energy.

When we first got him he looked like that old caveman cartoon.

His hair was long and matted, he was constantly itching; basically, he was a mess! But right from the start he made us laugh and he has been doing that for me ever since.

My other dogs all seem to understand being a part of a “pack” and that I am the pack leader, etc. Murphy has always just done what Murphy wants to do, when Murphy wants to do it. And he is ALWAYS getting into things.

True story:
One time I had come home from work and on my way home had made a last minute run for the border (i.e., got Taco Bell for dinner). This was after my divorce when I was living by myself and no one could judge my bad dinner choices. Ahhh, those were the days.

I let my boys outside (I had three dogs at the time–all boys and all rescues. They were quite a rag tag crew.) The boys came back inside and Murphy nestled in on the couch right next to me like he always does. He always has to be right by my side. I contentedly ate my Taco Bell, with little Murph resting his head on my leg and looking up at me, hoping to charm me into giving him some. When I finished, I got up to throw away my trash and Murphy hopped down and meandered in front of me, leading the way into the kitchen. It was then that I noticed . . . he had a dead bird stuck to his tail. He had been sitting next to me while I was eating, with a dead bird stuck to his tail. Can you believe it? Totally true.

He is now 14, I think. (I can’t be sure because he was a rescue.) He still acts like he is 5 and has the energy and chutzpah of a much younger dog. We recently discovered that his age is finally starting to catch up with him. He has congestive heart failure. We found out earlier this year. He had been coughing and even fainted so I took him in to the vet. Turns out, as dog’s age the valve that pushes the blood through the heart can sometimes start to weaken and leak. (I think this is especially common in small dogs.) The medicine that he is on seems to be helping a TON, but I know that I need to cherish every day. And I most definitely do.

I put together a montage of “Murphy Moments” so that you can see what I am up against in regards to cuteness . . . and then a picture of him the rest of the time (being a little rascal). 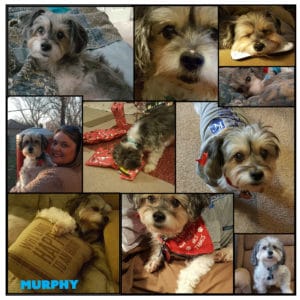 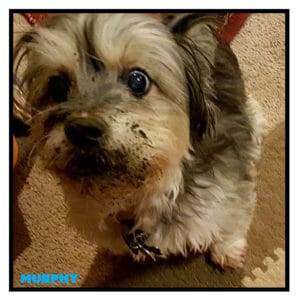